Our Objectives and History

Our Objectives and History

The Trust’s main objectives as set out in the Memorandum and Articles of Association are:

The East Malling Trust has evolved over many years through various guises. Today it is the leading private funder of horticultural research in the UK.

Its origins are related to the purchase of 22 acres of land at East Malling in May 1913 to establish a research station under the control of Wye College. This resulted from pressure on the Board of Agriculture exerted by fruit growers, especially those of Kent, for a fruit research station in the county to solve the problems of commercial growers in the rapidly developing fruit industry. In this, the industry was strongly supported by Mr Dunstan, the Principal of Wye College.

Captain R W Wellington, the first East Malling Director, in his account of the early development of the station stated “there can be no doubt, no-one at the Board of Agriculture thought for a moment that any important results would come from the establishment of the station but rather that it would be another demonstration fruit garden of which there were many already”.

However, the views of the Board did not take account of the vision of leading fruit growers of the day. There were so many problems requiring solutions that they were convinced of the importance of research in the development of their industry. 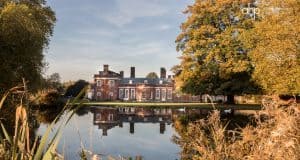 Over the years the original land was gradually added to, due to the initiative of fruit industry members, until the total exceeded 500 acres by the late 1950s. This expansion included the purchase in 1938 of Bradbourne House along with some 200 acres of good fruit land.

In the mid 1920s friends of East Malling decided to try to relieve the financial worries of the station by establishing an Endowment Fund of at least £30,000, the capital to be placed in the hands of Trustees with the interest to be used as the Trustees thought fit to meet the most pressing needs of the station. This Development and Endowment Fund later became the East Malling Trust for Horticultural Research.

Today, the Trust, which is based at Bradbourne House, has a board of nine Trustees drawn from leading members of the perennial crops industry and from prominent academics and leaders of the business sector.

The Trust is a charity and limited liability company. It raises funds through effective management of its land and property, the events business at Bradbourne House and The Orchards Event Venue and also the commercial farm and short courses business. In this way, it supports horticultural research through financial and other support to NIAB at East Malling.